While on one of the few girls trips that I was ‘allowed’ on, my girlfriend, Kaitlin confided that she was having problems with her marriage. I was shocked, as they seemed so happy. Kaitlin proceeded to tell me that her husband was verbally abusive. I was dumbstruck. It was hard to believe. She is one of the strongest women I know. Not only is Kaitlin extremely intelligent, independent and successful as CEO of her own company, she is stunning – the whole package deal and could have any man at her beck and call.  How had Kaitlin of all people put up with that kind of demeaning, abusive behavior?

However, much of what she said resonated with me. Scott and I had been seeing a marriage counselor for a while at this point.  And, when I expressed in the past to Scott that his words were hurtful, he would always say I was overreacting, being dramatic, exaggerating; completely disregarding my feelings.  So, when I returned home after that trip, I bought a copy of The Verbally Abusive Relationship by Patricia Evans. My world changed with the first page. (more on that later) 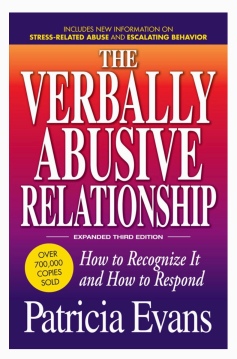 In my book Year of Thorns, I refer to 17 emotional manipulative tactics of the narcissistic psychopath that I learned to identify in my path to recovery.  This was an important tool in my research to understand what happened to our family while we lived with someone with a severe personality disorder (that I learned later), and the challenges I faced throughout the divorce process.  By understanding the guiding principals and motivation behind those manipulative tactics, it became easier (over time) to identify each one and how best to respond (with practice).   I’m taking a detour from the order in my book, and introducing the first (and easiest) tactic to identify in this blog:

Verbal abuse is when a person forcefully criticizes, insults, or devalues someone else. Characterized by underlying anger and hostility, it is a destructive form of communication intended to harm the self-concept of the other person and produce negative emotions in attempt to control another through non-physical means. Verbal abuse, and most other types of abuse, is caused by an underlying disorder. Most often, the disorders are borderline personality disorder, narcissistic personality disorder, or sociopathy. Healthy people might occasionally lose their temper, leading to an outburst, but a consistent pattern of hurtful verbal abuse can only be the result of a deeper problem.

At first, I thought the problem I faced was verbal abuse, and that’s how I first started finding help. I began to read everything I could get my hands on.  But in my situation, like most, the verbal abuse was only one part of a bigger and more serious situation. This was true in Scott’s case, where he was later diagnosed with a personality disorder in his psychological evaluation. Part of my understanding of Scott’s disorder lead to my “light bulb moment”, where confusion and hurt suddenly opened up to insight — and the first steps to protecting myself (by identifying his emotional manipulation tactics) and to healing.